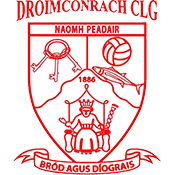 Droim Conrach CLG was founded in the parish of Drumconrath, North Meath, in 1886. The club has won the junior title 3 times in its history, 1928, 1963, and 1996. The 96 final threw huge crowds to Pairc Tailteainn, as it was against fellow parishioners Meath Hill. The team reached the intermediate final in 2006 but were beaten by Rathkenny.

The team is joined at underage level with Meath Hill. The club rooms and pitch are located at Birdhill just outside the village. Currently the clubs has teams at Junior A, Junior D, and U 21 levels, as well as a ladies team Dee Rangers