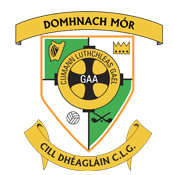 Donaghmore CLG (DomhnachMor) was founded in 1923 in the parish of Donaghmore which is located 3km south of Ashbourne. Donaghmore, also known as ‘The Moores’, won the Meath Junior Championship in their very first year of existence,in 1924. They appeared in the following six Senior Championship finals winning the title in 1927 and 1928. They were beaten in the Senior final in 1935 and won the Intermediate Championship in 1938. They won the Feis Cup in 1929, 1941 and 1945.

There was football played in Ashbourne as far back as 1798 with a report by a Dublin Castle agent that a crowd of 300-400 people had gathered at Milltown, Ashbourne to watch the local men ‘playing at football’.
Donaghmore CLG was renamed Donaghmore/Ashbourne in 1996 to reflect the increased number of players and supporters from Ashbourne. In December 2007 the club moved from it’s previous home at The Wotton to new premises atKillegland West in Ashbourne.

In more recent times the club has had successes at underage, Junior and Intermediate levels. Donaghmore Ashbourne won the Minor Championship in 2006, 2007 and 2008 and in 2010 completed a historic double winning the U-21A and U-21C Championships on the same day. A further Minor Championship win was achieved in 2013. There have been successes also at Hurling, Ladies Football and Camogie.

Donaghmore Ashbourne CLG currently has 45 teams competing at Football, Hurling, Ladies Football and Camogie and enjoys a strong support in the community around Donaghmore and Ashbourne.