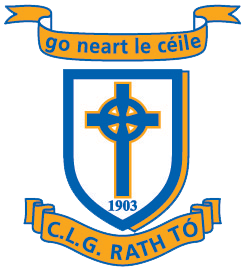 Club History
In the 1880’s Ratoath Hurling Club was founded by 2 local men, John Caul and Bill Duffy. Duffy utilised his racing colours, (which were green with a yellow, over the shoulder sash), as the first strip used by the club. In 1912 Ratoath won the Senior Hurling League title, the first recorded honour for the Club, and a Junior Hurling Championship followed in 1929 at the expense of Kildalkey.

The Club colours changed sometime during the early twenties and Ratoath began to wear a blue jersey, which had a laced neck front and white collar. It is believed thatcher the Club retained these colours up to the early fifties when a group of clubmen who had attended the 1949 All Ireland final involving Tipperary were impressed with the blue and yellow jerseys that they adopted them and are still used by the club to this day