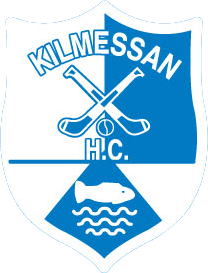 Kilmessan is a small village in Co. Meath surrounded by many historical places including the Hill of Tara, Bective Abbey, Killen Castle, Dunsany Castle, and Trim Castle.

The Kilmessan club colours are blue and white and for generations, these colours have been worn with pride.

Kilmessan G.A.A. Club was formed in 1902 by such men as Harry Doran, John Chambers, and the Coady Brothers. It did not take long before Kilmessan won its first S.H.C. in 1907 by defeating Athboy on a score of 7-08 to 0-01. However, Kilmessan did not appear again until the 1920s when they won 3 Senior titles in 1922, 1925, and 1927. Men such as Mick Madden, Billy Smith, Joe Loughran, and Tommy Loughran had connections with the Meath Junior Hurling team at the time.

Many of these minor players progressed onto Club Senior level, which went on to their 6 in a row from 1943 to 1948. Kilmessan also won a Senior Football Championship in 1936 and went on to do the double in 1939.
Kilmessan faded in the 1950 and were relegated to Junior status. They had a few players who played with St. Patrick’s who won the Senior Hurling Championship. Brian Smith won his only Senior Hurling Championship that year.

The 1970s started quietly with Boardsmill being the dominant team winning 4 S.H.C. Kilmessan resumed their dominance with wins in 1976,1977, and 1978 by beating Boardsmill. Lads like Patsy McGovern, Seán Horan, Charlie, Willie, Mattie Killion, Cyril Maguire, Eugene O Neill, and Niall Riordan were leaders of this era.

Kilmessan hit the glory days again by winning 3 in a row in 2002, 2003, and 2004. Under the guidance of Ollie Horan, Nicky Horan, Anthony O Neill, and Paul Donnelly.
In 2008 Kilmessan hit the big time as Martin Curran and his selectors Tony Donnelly and Ger Dinneen beat Kildalkey after a replay 0-13 to 0-08. Next was the Leinster Intermediate Championship a competition that Kilmessan progressed to the Final. Their opponents were Erin’s Own from Kilkenny. Kilmessan made their way to Nowlan Park in Kilkenny City and beat them 1-06 to 1-07. Ger O’Neill as captain lifted the cup aloft, some of his teammates that year were Nicky Horan, Steven Clynch, David Donnelly, Joey and Charlie Keena, and Mark Brennan.

Now for the All-Ireland semi-final against a Galway team Cappataggle. This stage was too far and Kilmessan were beaten on the day after extra time.

Kilmessan again returned the Jubilee Cup to the parish of Kilmessan/Dunsany in 2013 when a valiant Longwood team were beaten 2-16 to 0-11.

Also, in 2016 Kilmessan had 4 members who won the Christy Ring Cup, Joey Keena, Kevin Keena, Shane Brennan, Steven Clynch who secured the win on the day with a long range free.