Will Oldcastle emulate the class of ’95 or can Seneschalstown make history?

Will Oldcastle emulate the class of ’95 or can Seneschalstown make history?

It is back to Dunganny on Wednesday evening for the second night of semi-final action in this year’s LMFM Meath Minor Football Championship.  On Monday evening Donaghmore/Ashbourne laid down a marker when inflicting a seven point defeat on reigning Delany Cup holders St. Colmcille’s.  Can the Moors be stopped, and can they achieve a historic football and hurling double? On the pitch next door, St. Ultan’s/Cortown Gaels booked their place in another final for the season when despatching Bective/Dunsany, also by a seven point margin.

On Wednesday, the second of the Division 1 semi-finals takes centre stage on Pitch 2 (middle grass pitch), while next door the first of the Division 2 semi-finals will be played.  History could be made in that Division 1 encounter when according the Seneschalstown social media pages, the club could qualify for their first ever Minor Championship Division 1 decider on their own.  It would also be a historic achievement for Oldcastle if they win as their last Division 1 decider was way back in 1995, I feel old just writing that.

In the Division 2 semi-final, we have a mouth-watering encounter in prospect as Killary Emmets and Navan O’Mahonys meet in what is a repeat of their gripping last four encounter back in the times when games were played in front of no more than two hundred spectators in 2020.  On that evening it was the town side who just poked their noses in front at the end of the game before going on to win the title.  Last year, perhaps driven on by that close encounter in 2020, Killary Emmets it was who claimed Division 2 glory when they toppled a fancied Skryne side under the floodlights in Ashbourne.

It is quite likely that the biggest crowd of the week in Dunganny will be present on Wednesday evening packed in around Pitch 2 when these two sides meet in what is a most intriguing semi-final of the LMFM Minor Football Championship.  In the eyes of many throughout the county, Seneschalstown will be fancied to account for the side from the north of the county as they have a well-established pedigree in Division 1. This side has contested and won Division 1 titles at every age grade since U-12, amassing the U-12 League, U-13 League, U-15 Championship and Minor Tournament along the way.  Oldcastle on the other hand haven’t been parading back to the Cavan border with trophies with anything like the same regularity.

While the progression of the Boynesiders to the last four was effectively assured before the final round of group games, Oldcastle had an altogether different outlook approaching the final round as they had fallen to very narrow defeats to Ratoath and Donaghmore/Ashbourne in the opening couple of rounds.  Indeed, the Barry O’Connell managed group of players looked destined to be eliminated when trailing Gaeil Colmcille by five points at half time on September 10 but as is typical of this group of players, they dug deep and with Rory Crawley at his devastating best in attack, they staged a Lazarus like comeback from the dead to secure their passage to the semi-finals.

There is no shortage of talent in the Oldcastle ranks and this year they are boosted by some fabulous footballers from their neighbouring clubs Moylagh and St. Brigid’s.  In Cian Blake they possess one of the best underage free takers in the county while Bobby Masterson is a centre back of the highest quality.  The Crawley brothers have some fine pedigree as they are cousins of James and Sean O’Hare from Rathkenny who have starred at U-20 and Minor level for Meath.  The O’Hare’s might be good at minding the house in defence, but their cousins have shown they know how to pick the lock of even the tightest of defences.  It has already been a great year in the Gilsenan household with Ciara being part of the Meath panel that won the Ladies All-Ireland, but it could become an even greater year if her younger brother Alan can help his side to win the Minor Championship. 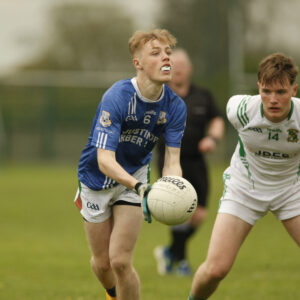 Oldcastle centre back Bobby Masterson in action in the LMFM Tournament Group B Final. Image via Hoganstand.com

Seneschalstown are aiming to go one better on Wednesday evening than the class of 2018 from the club managed when despite being well fancied for ultimate glory, they were defeated by Donaghmore/Ashbourne in the Championship semi-final.  Indeed, The Pundit seems to recall the Crawley’s cousin James O’Hare crossing the Boyne to play with the Yellow Furze side in that year’s competition.  Who will he be cheering on in Dunganny?

Shrewder judges than I believe this is a group of players who could go on to achieve great things as adult footballers for the club, but will they be starting off their adult playing days for a Senior or Intermediate club?  That picture might become clearer on Friday evening when the club contest the Relegation Playoff semi-final.  But back to the Minors and there is talent everywhere you look on this team. 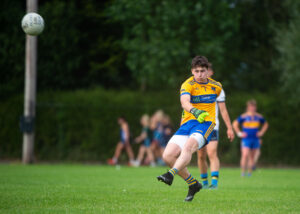 Anybody present in Bective back in early May could not have failed to be impressed with Danny Waters who lined out at full back in their Tournament Final victory over Skryne.  He turned in a masterful performance on that occasion but is likely to operate a bit further from his own goal on Wednesday as he dons the number six jersey.  The two corner forwards, Eamon Finnegan and Jack McDonnell come from families steeped in the club with their fathers being part of the clubs’ side that won the Senior Football Championship back in 1994 while Liam Dillon at wing back is the son of another of that Keegan Cup winning side.

If true about the club never contesting a Minor Football Championship Division 1 Final on their own, it would be a major achievement were Seneschalstown to achieve it for the first time at a time when the Minor grade is becoming harder for a rural club to target glory in the top division with Summerhill being the only club from a rural area of the county to win the Championship since the turn of the Millenium.  Remarkably they have won it three times within that timeframe.  Could Seneschalstown strike a blow here for rural clubs, seven years after Summerhill’s last success?

Seneschalstown Path to the Semi-Final:

Oldcastle Path to the Semi-Final:

There was a time when O’Mahonys were the dominant force at the Minor grade, but you have to go back to 2010 for the last time they dined at the top table with success.  In an attempt to get the Brews Hill side back to where they believe they belong to be, some of the top players of their recent past and players with a rich pedigree of underage success have taken the reigns of the Minors.  Damien Moran was an excellent defender for O’Mahonys over many years ad he pulls on the Bainisteoir bib for what The Pundit thinks is his third season in succession.  Moran is ably assisted on the sideline by Rory Maguire, Ross Geraghty and Simon O’Connor who some will remember as a diminutive corner forward on a St. Patrick’s Navan team that won the Hogan Cup around the turn of the Millenium.

O’Mahonys appear to have struggled with injuries at various points of the season and there is no doubt that they felt the loss of Eoghan Nugent who is currently on the injured list.  Their full back line is as mean as they come with Colm O’Toole, Riordan Russell and Diarmuid O’Bric forming a formidable trio.  Russell in particular looks like a defender who could fill the number three jersey for their adult first team with the same level of comfort as club stalwart Niall McKeigue did for many years.  Up front Ivo Fitzherbert is a talented corner forward while much of their attacking play goes through Ciaran McAreavey at wing forward.

The rivalries between Castletown and Syddan ahead of their Junior Football Championship semi-final meeting this weekend will be put to one side for about an hour on Wednesday as the clubs combine forces to line out as Killary Emmets against O’Mahonys.  Meath Minor panellist Darragh Kelly lined out in the half forward line in last year’s Liam Tolan Cup decider against Skryne and he now takes on the mantle of spiritual leader of the group from his midfield berth.  His partnership with Patrick Balfe has served the team well to date and if they can get the upper hand over O’Mahonys then that will be half the battle won.

Cillian Oakes and Adam Wogan are capable of raiding forward to great effect from wing back, something which Damien Moran is going to have to be cognisant of.  Up front they possess plenty of scoring power with the likes of Cillian Rafferty, Corey Curtis and Jack Dowdall all capable of keeping the scoreboard ticking over.

Killary Emmets Path to the Semi-Final:

Navan O’Mahonys Path to the Semi-Final: 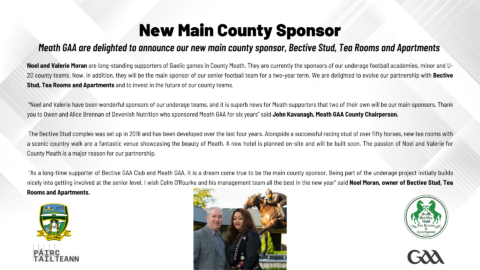 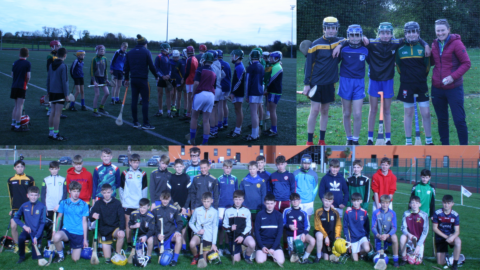 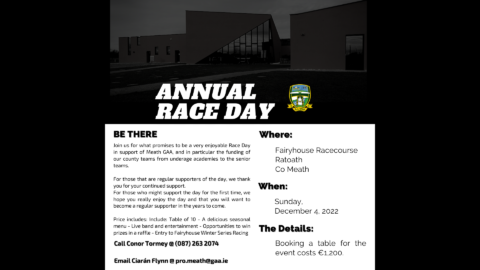