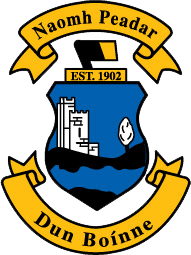 Established in 1902 by Bob O’Keefe, a Primary School Teacher living and teaching locally but originally from Mooncoin, Co. Kilkenny, the Hurling Section of Dunboyne GAA Club has been in existence for more than 100 years. It wasn’t until some 40 odd years later in the late 1940s that the game of Gaelic Football was properly organised within the Club. It was at this stage that the GAA Club in Dunboyne was re-formed under the guidance of Father Carberry, C.C. and in 1952 became known as St. Peter’s GAA Club, where today, both football and hurling (along with the Camogie Section) are thriving.

Initially located in Tom’s Field on the Navan Road and using an old Prefab for Changing Rooms, the Club moved to their site on the Rooske Road which was officially opened on May 16th 1993, a day that saw Meath take on Kildare in Rooske to celebrate the opening of the pitch.

Given the growing nature of Dunboyne and the ever increasing enthusiasm for GAA in the locality major development of these premises was required and 2007 saw the opening of the ‘New’ Clubhouse.