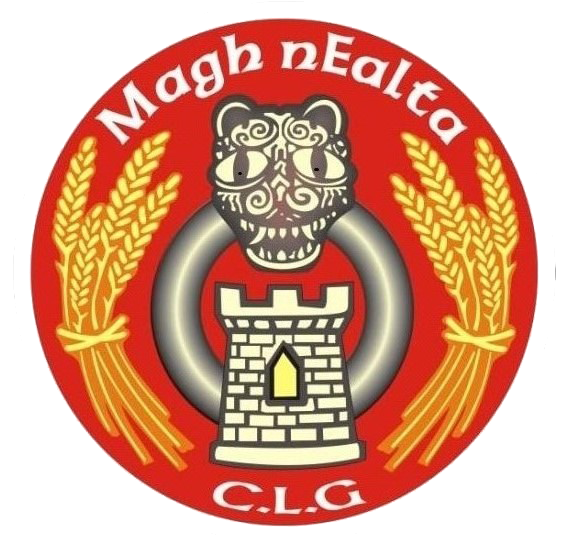 Ever since the foundation of the GAA in the late 1880s there has been a club affiliated in he Parish of Moynaty, thus making it one of the oldest units in County Meath. The club has been known as Moynalty Owen Roes, St. Mary’s, and now as Moynalty GFC.
The 1930’s proved to be the most successful period for the club, winning two Senior Championships (1932 & 1937) two Intermediate titles (1931 & 1936) and a Feis Cup in 1937.

However that wasn’t the only success for the North Meath club, in 1987 Moynalty won the Junior Championship. The club boost fine clubrooms, pitch and facilities at Bellair, just one mile outside the village of Moynalty – ‘Irelands Tidiest Town 2013’
Indeed the same facilities were awarded the ‘Grounds of the Year’ in 2003.

Many of our players have been recognised in various capacities over the years and many have represented Moynalty proudly as players, coaches, selectors, referees.

The late Matt Gilsenan was a proud Moynalty man, who was Captain of the All Ireland team in 1939. Matt was a constant support and assisted Moynalty GFC in many ways in the years that proceeded 1939. The late Paddy Connell also represented Moynalty at County level, as a midfield in the All Ireland of 1954. The Club in Moynalty will continue to recognise the importance of treating all of its members both young and not so young with dignity and respect. A special emphasis is placed on encouraging and ensuring that those in the Community with a disability are included in all Club activities

Moynalty GFC recognises that the sense of achievement, fun and fair play that young people experience when participating in Sport will encourage their continuing involvement and help them develop to their true potential.