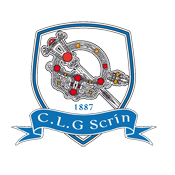 The current Skryne club dates from 1926. Football in the parish however, goes back much further to before the GAA was formed. Fr. McManus, after whom the club pitch is called, arrived in the parish in 1931 and reorganised the club into what is there today. When Meath won the first major trophy the N.F.L., in 1932-’33, Skryne was represented by Tony Donnelly and thus became the first of a long line of great players from the club to bring honour to the county.

As well as contributing players to every successful Meath team Skryne also contributed five players to the Ireland International rules teams (Colm O’Rourke, Liam Hayes, John McDermott, Trevor Giles and Paddy O’Rourke). Also in 1968, when Meath represented Ireland in Australia, there were three Skryne men on the team. Skryne dominated Meath football in the 1940s winning six senior titles. They currently have thirteen senior titles, the last in 2010. In 2012 Skryne launched their club history and celebrated 75 years continuous in the senior ranks as well as 125 years of organised football in the parish. Currently Skryne caters for players of all age groups and has a very active ladies section within the Club.