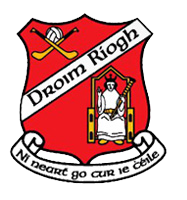 Drumree and surrounding localities have a long association with the GAA dating back to the affiliation of Merrywell/St. Martins in 1887. A number of teams came and went including the Warrenstown-Dunshaughlin amalgamation, the Drumree Volunteers, the Pelletstown Reds and Culmullen before the start of the present team in the 1940s.

Over the years there have been some notable milestones – procurement of the present field in 1949, the building of the Community Centre in 1988, the start of hurling in 1991 and the purchase of the juvenile pitch in 2007. In 2010 the redevelopment commenced which included a full sized astro pitch, hurling wall with lights main pitch and completion of the juvenile pitch. There has also been some notable successes on the field of play – the Junior championship of 1959, the Intermediate championship of ’61 and ’69, the junior football and hurling double in ’98, the intermediate hurling Championship wins of 20003 & 2010. 2009 saw the establishment of camogie in the club and we now provide camogie teams in all age groups from nursery (U6) to adults. Our adult Camogie team won the Junior Hurling Championship in 2011.In 2012 winning the U21B hurling and minor championships. In 2013 Drumree success continued with wins in the U 12 hurling, U16 Camoige and reaching the final against Kiltale in U21A hurling.

The history of Drumree is not just about participation on the field of play. Drumree has played it’s part in the development of the community and continues to do so with the establishment of Juvenile hurling and camogie and Senior camogie in 2009. There are many people who, in the past and present, have played an important part in the development of the club – they worked tirelessly behind the scenes and for this we are, as a club, extremely grateful and appreciative.