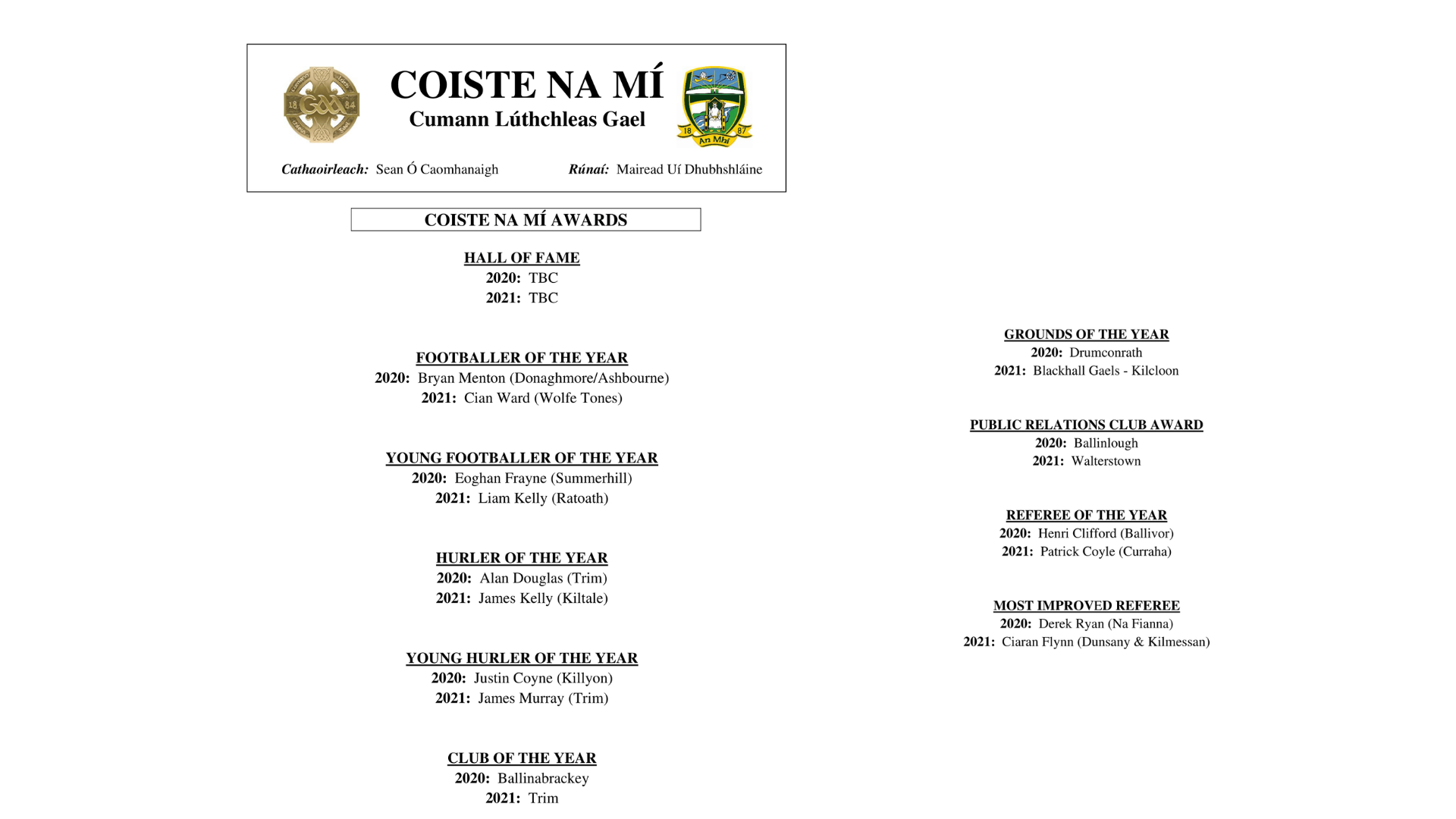 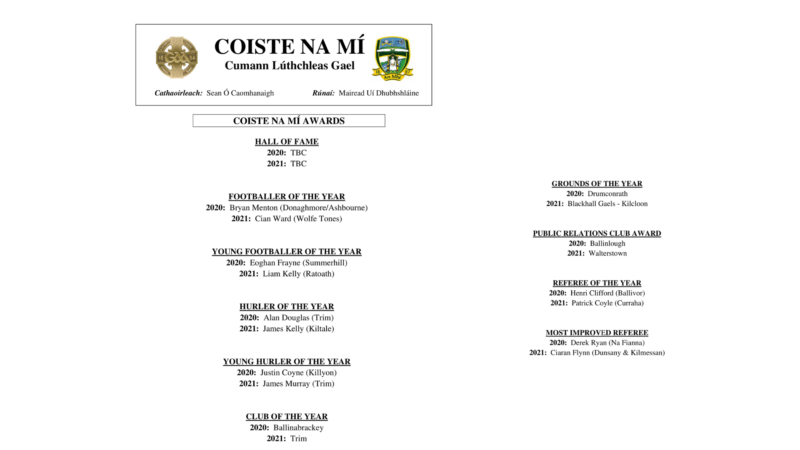 Comghairdeas to all the winners across the various categories.

The 2020 Footballer of the Year award has gone to Bryan Menton (Donaghmore/Ashbourne), while the 2021 recipient is Cian Ward, who helped his club Wolfe Tones to win only a second-ever Keegan Cup.

The Young Footballer award for 2020 has gone to Eoghan Frayne of Summerhill, while awarded the 2021 prize is Liam Kelly of Ratoath. Both captained the Meath Minors to a Leinster crown with Liam heading all the way to the Hoganstand steps to raise the All-Ireland.

Alan Douglas of Trim has been named 2020 Hurler of the Year with the sensational point to win the county final being a major highlight. The 2021 award has gone to James Kelly of Kiltale who excelled for club & county all year.

While for the Young Hurler, Justin Coyne of Killyon is the 2020 recipient, and James Murray of Trim gets it for 2021. Both starred for their clubs and for the County U20s.

Ballinabrackey have been named as the Club of the Year for 2020, while County and Leinster Intermediate football champions Trim have been honoured for 2021.

The 2020 Grounds of the Year award goes to Drumconrath, and picking up the 2021 prize are Blackhall Gaels (Kilcloon). The improvements done are a credit to the communites.

The P.R.O. award for 2020 has gone to Ballinlough, and for 2021 to Walterstown. Susan Farrell (Ballinlough) and Ruth Chambers (Walterstown) lead great PR teams and are great ambassadors for the GAA in their clubs and counties.

The Referee of the Year for 2020 is Henri Clifford of Ballivor, and for 2021, Patrick Coyle from Curraha. Both referees delivered excellent performances in the knockout games they officiated and displayed great composure under pressure.

And in the Most Improved Referee category, Derek Ryan of Na Fianna picks up the 2020 accolade, while the County P.R.O. Ciaran Flynn of Dunsany and Kilmessan, has been honoured for 2021. Derek built on his 2020 season and refereed key games in Meath and the County finals in football and hurling in Louth in 2021. Ciarán made a return to refereeing 2021 and officiated Senior championship games. His year was capped off by refereeing the IHC final.

In addition, two more names will be added to the County ‘Hall of Fame’ – their identity will be unveiled at the forthcoming Awards Night. 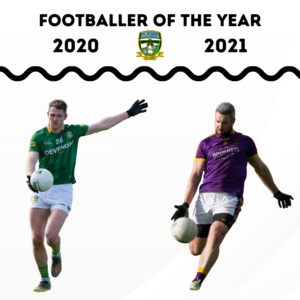 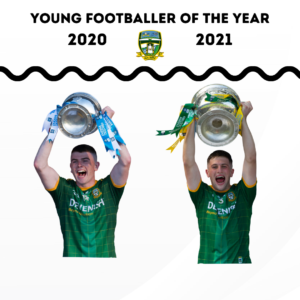 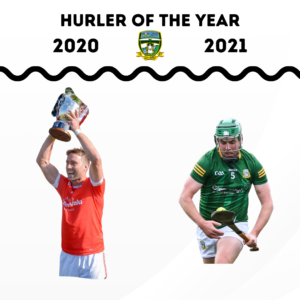 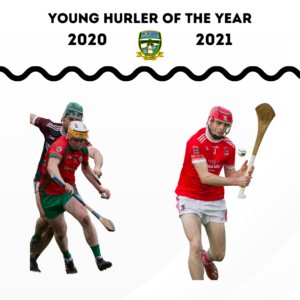 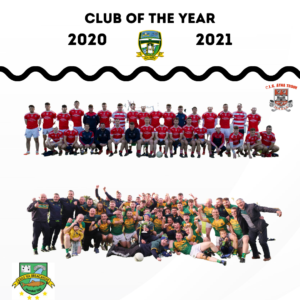 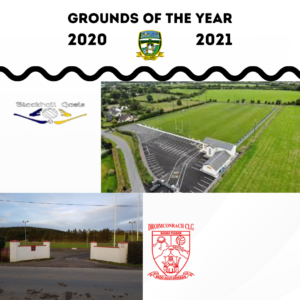 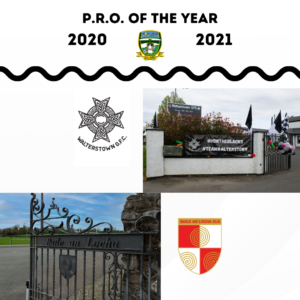 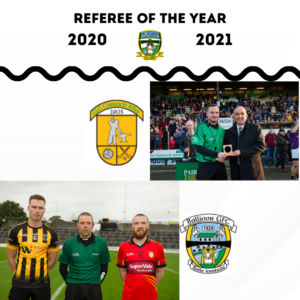 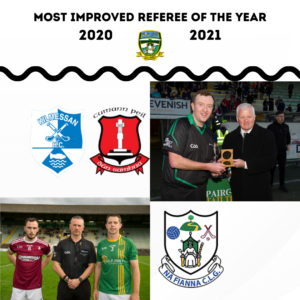 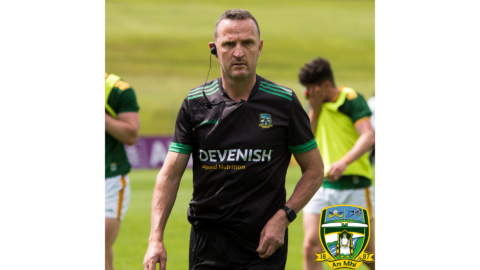 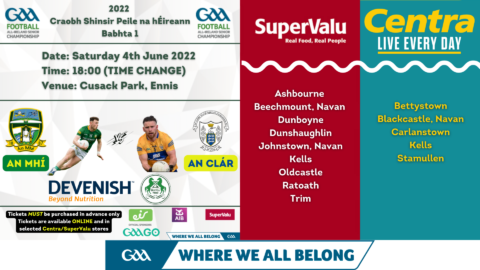 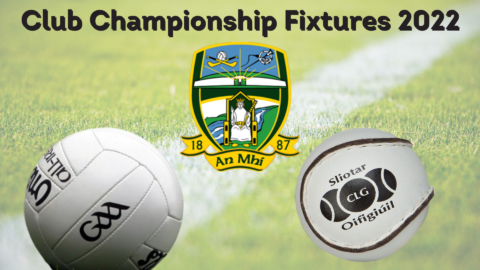 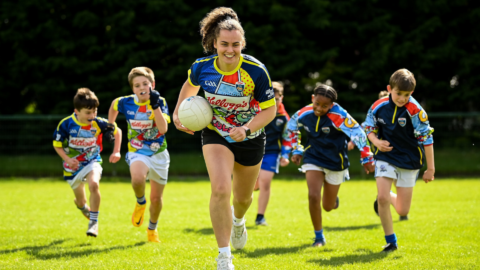 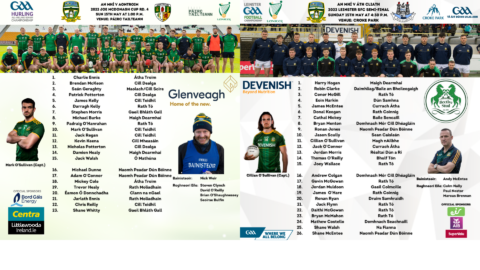 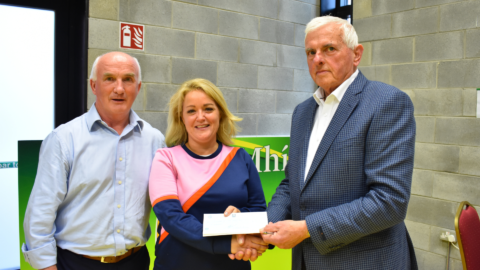 Presentation to Jigsaw from Meath GAA